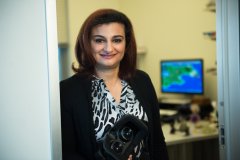 Magy Seif El-Nasr is an associate Professor in the Colleges of Computer and Information Sciences and Arts, Media and Design, where she directs the GUII (Game User Intelligence and Interaction) Lab. Dr. Seif El-Nasr earned her Ph.D. from Northwestern University in Computer Science. Her research focuses on two goals (a) developing automated tools and techniques for authoring, adapting, and personalizing virtual environments (e.g., interactive narrative, believable characters, and visuals), and (b) developing methodologies to model and understand players’ behaviors and motivations through the development of novel mixed-methods approaches that use machine learning and visual analytics tools. She recently published the first book on the subject of game analytics, called Game Analytics: Maximizing the Value of Player Data. Her work is internationally known and cited in several game industry books, including Programming Believable Characters for Computer Games (Game Development Series) and Real-time Cinematography for Games. She has received several awards and recognition within the game research community. Notably, she received four Best Paper Awards and several citations in industry books and magazines. She is on the editorial board of: IEEE Transactions on Games and IEEE Transactions on Affective Computing.